The Conference on Faith and Science (COFAS) took place at Arizona State University in Tempe on March 22-23, 2019. The theme of COFAS was “Pursuing Science and Christian Faith for Human Flourishing” (see www.azccs.net/cofas). What an extraordinary gathering of 250 university students, faculty, and professionals from around Arizona in conversation with leading science professors from the United States, Canada, and the United Kingdom!

On Friday evening, after worship, scripture on Unity (ἑνότης, John 17:21), and prayer, the history and philosophy of science and Christian faith were compellingly summarized by Dr. Stephen Barr (Professor of Physics, University of Delaware, and President of the Society of Catholic Scientists; www.catholicscientists.org) and by Dr. Leslie Wickman (Professor of Engineering, California Baptist University, and Executive Director of the American Scientific Affiliation; www.asa3.org). They then had a conversation with the student masters of ceremonies, Bethany Bokel and Alex Mejia.

On Saturday morning, after worship, scripture on Peace (םלשׁו, Jeremiah 29:7), and prayer, Professors Georgia Dunston (Founding Director, National Human Genome Center, Howard University), Don Page (Theoretical Physicist and Cosmologist, University of Alberta), and Everett Worthington (Emeritus Professor of Psychology, Virginia Commonwealth University) shared inspiring stories from their work in science as followers of Christ. They were then honored for their lifetime achievement and blessed in prayer by Emmanuel Chijindu from the African Students Forum at ASU.

After the morning plenary session, there were breakout sessions on (1) Biological, Biomedical and Health Sciences; (2) Engineering and Technology; (3) Environmental and Sustainability Sciences; (4) Historical, Philosophical and Theological Studies of Faith and Science; (5) Physical and Molecular Sciences – Astronomy and Cosmology; and (6) Psychological, Behavioral, and Social Sciences. Besides the speakers noted above, the tracks featured Professors Andrew Briggs (Oxford University), James Buizer (University of Arizona), Greg Cootsona (California State University, Chico), Fr. Paul Gabor (University of Arizona and Vatican Observatory), Philip Kurian (Howard University), and Jonathan Lunine (Cornell University), as well as Jerry Lawson from the Environmental Protection Agency and Drew Rick-Miller from Science for Ministry. Following the presentations, there were responses and discussions with local faculty members and students from ASU and Grand Canyon University.

An extended lunch period allowed unhurried conversations among participants in the Student Pavilion and the adjacent Courtyard (the weather was beautiful). The final plenary session began with worship, scripture on Love (ἀγάπη, Luke 10:27), and prayer, followed by summaries of the breakout sessions presented by the track leadership teams so that all could “listen in” on the diverse discussions that took place in the morning.

The conference concluded with blessings by campus and church ministers from many different Christian denominations, including Baptist, Catholic, Church of Christ, and Lutheran. Many more denominations were represented among the students, faculty, and ministers attending COFAS. It was a beautiful experience of Christian unity and fellowship, and a deep affirmation of Christians who are pursuing science and faith together for human flourishing.

We are grateful for all whose efforts made possible this conference. Many labored sacrificially, especially Sarah Sanders, Hannah Parmelee, Claire Allensworth, and Jenna Worrell. COFAS was sponsored by the Arizona Center for Christian Studies, by Christian student organizations and faculty at Arizona State University, Grand Canyon University, University of Arizona, and University of Mary, and by the American Scientific Affiliation and Veritas Forum (www.veritas.org). Undergraduate Student Government (USG) at ASU provided funding for the Veritas Forum the evening before the conference. COFAS was made possible through the support of an award from the Conversations in Community project of the Office for Science, Theology, and Religion (STAR) Initiatives at Fuller Theological Seminary (www.fuller.edu). The opinions expressed do not necessarily reflect the views of Fuller Seminary, the Conversations in Community project, or other sponsors.

Stephen Barr, Professor of Physics, University of Delaware, and President of the Society of Catholic Scientists (Physical and Molecular Sciences / Astronomy and Cosmology)

Jonathan Lunine, Director of the Cornell Center for Astrophysics and Planetary Science, Cornell University, and Vice President of the Society of Catholic Scientists (Physical and Molecular Sciences / Astronomy and Cosmology)

Don Page, Professor of Physics, University of Alberta, and Cosmology Fellow of the Canadian Institute for Advanced Research (Physical and Molecular Sciences / Astronomy and Cosmology) 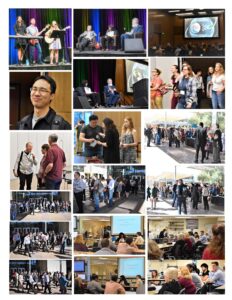